A crash and smash attack is a burglary tactic that focuses on your home’s security panel or keypad, using speed and brute force to prevent it from sounding the alarm.

How does a crash and smash attack work?

The attack begins with the burglar kicking or barging through the front door—the “crash”. Then, they quickly locate and destroy the security panel or keypad—the “smash”—before the alarm sounds.

The objective is to take advantage of the security system’s time delay. Most systems give the homeowner between 30 and 60 seconds to disarm the system before sounding the alarm and generating an emergency signal or alert. A crash and smash attack relies on obliterating the panel, and its ability to signal, before this happens.

It’s a smart idea—but Alarm.com is smarter. Unlike other home security technology, a security system powered by Alarm.com has proactive safeguards to defeat the attack, beginning before the “smash” even happens. 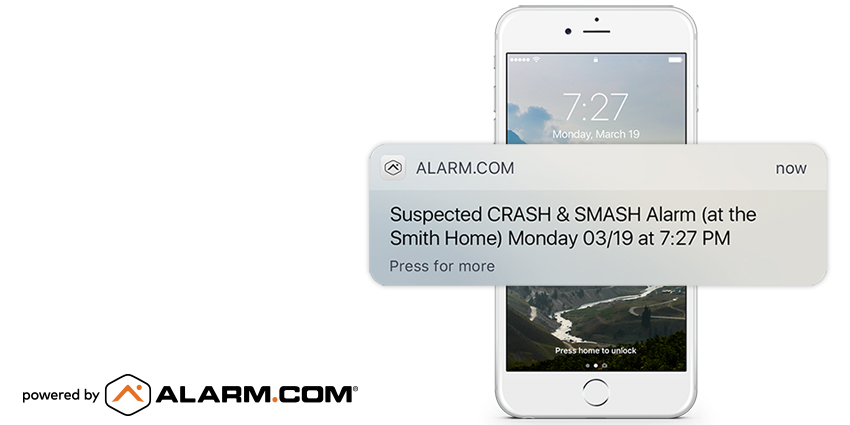 Alarm.com’s patented Crash and Smash Protection ensure that your security system still signals for help, even if it can’t send the signal itself. That’s thanks to our cloud security technology.

When your security system starts its countdown, Alarm.com’s platform knows to anticipate either a ‘disarm’ or ‘alarm’ event. Should your panel suddenly go offline during the countdown, however, the Alarm.com platform treats it as a third type of event—a suspected crash and smash attack—and quickly signals for help.

Because this action takes place on Alarm.com’s secure cloud platform, it doesn’t matter how effectively the intruder smashes your security panel.

On receiving a crash and smash alert, a trained security professional at Brinks Home Security assesses the situation, and can quickly alert your local police department to dispatch help to your home.